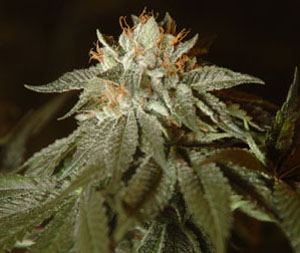 The legendary “clone-only” Pre-98 Bubba Kush is one of the early Kush strains that started Kushmania in the 2000’s. Famous for its strong Indica dominant high, Bubba Kush is a connoisseur favorite due to its distinct Kush taste and earthy, sweet, flavor with hints of coffee and chocolate. The various phenotypes of the reversed/feminized Bubba Kush S1’s will all have high TCH 9 levels and flavor profiles that include coffee, chocolate, hash, “7-Up”, pine, lemon, and fruit.

The Bubba is a moderate yielder that typically produces golf ball sized dense nuggets covered in frost and flowers that look, smell, and taste as dank as anything you’ve ever tried.
While the amazing taste will have you reaching for more, be wary of the strength as it can leave novices fast asleep on the couch and veterans with a 1000-yard stare and a big, goofy smile.

The origins of Bubba Kush are difficult to trace with any degree of certainty but the story I was told by a reliable cannabis insider is that in the early 90’s an accidental pollination of a “Crippy” bagseed female (dubbed “OG”) with a select Northern Lights female (dubbed “Bubba”) that had a few hermie flowers blowing pollen and made some seeds on one of the lower branches of the “OG” female.

The Bubba takes 63-70 days of flowering for the full narcotic effect and the strongest terpene profile. Rosin and extracts from Bubba are divine.

"If u know Bubba Kush u know how dense they r. These bitches aren't just dense, there like steel nuggets, I honestly can't even squeeze it a little, NO give on them. Even the small nuggets r bending branches" @ndanknugs
"Pre 98 bubba s1 from @katsubluebird real deal bubba the choc coffee smell is crazy 🔥🔥🔥" @uppercrustgenetics (@humblingriverfarms)