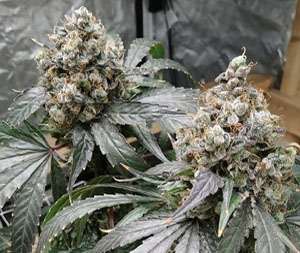 Bodhi’s Bandaid Haze (#7 pheno) crossed with a reversed Pre-98 Bubba Kush. Here is the Bandaid Haze backstory as told by DocGreenstone: “There were these seeds that came from this Spanish grower in South Holland, Ronni aka Ronaldo, who was part of the “A5 crew”, who had a Thai pollinate his room. “a5” is shorthand for ‘nl5 x haze A’ different from her sister “c5”, or ‘nl5 x haze C’. These seeds were sent to e.T., who then shared some with Bodhi. Bodhi germinated them in early 2013 and all he got was one male (a5Haze x Mirakel). He doesn’t normally keep males if there are no females to evaluate but he used it anyway to pollinate the Cuban Black Haze cut that he had. The strain was referred to as Piff by Bodhi initially. The beans were shared almost exclusively with Doc D, who after running them selected the Piff #7 and shared a cut of it back with Bodhi. Bodhi had it tested and it came back in the high 20’s. Bodhi and Doc D shared cuts with other forum members here in late 2014 and after some discussion most of us agree that it is actually better than Cuban Black Haze and it also has a shorter flower time (100 days). Everyone, Bodhi, Doc D, e.T and everyone else, refer to this cut now as “Bandaid Haze”. Bodhi coined the term because, “it heals all wounds”.” Phenos of this cross run from Haze dominant to Kush dominant, with terps and flavors from both strains present in the progeny. Medium to heavy yielder.
"These were straight up Nevilles haze "the gun metal workshop filings" pheno with a forestry limey front. They do have an ultra acidic disinfectant hospital clean/freshly removed bandaid from the sealed sterilized plastic packaging terp. The mouldy barely finished ones outdoors novermber were an 8 in potency i had to hit the best smelling one with an auto granny apple for ultra early spring plant outs and summer harvests next year. They grow tall with massive very waxy fan leaves and resin glands are bulbous thick indica. Khraze." Bubba Zanetti from a Private Forum
"Smells strongly of earthy incense, with subtle cool floral notes but overall pungent. The buds are huge and have a good mixure of lime green, neon green, and purple tints with fire orange hairs. The buds show off a lot of calyx but are very dense. Upper fans turning dark purple, almost black. " @triforceorganics